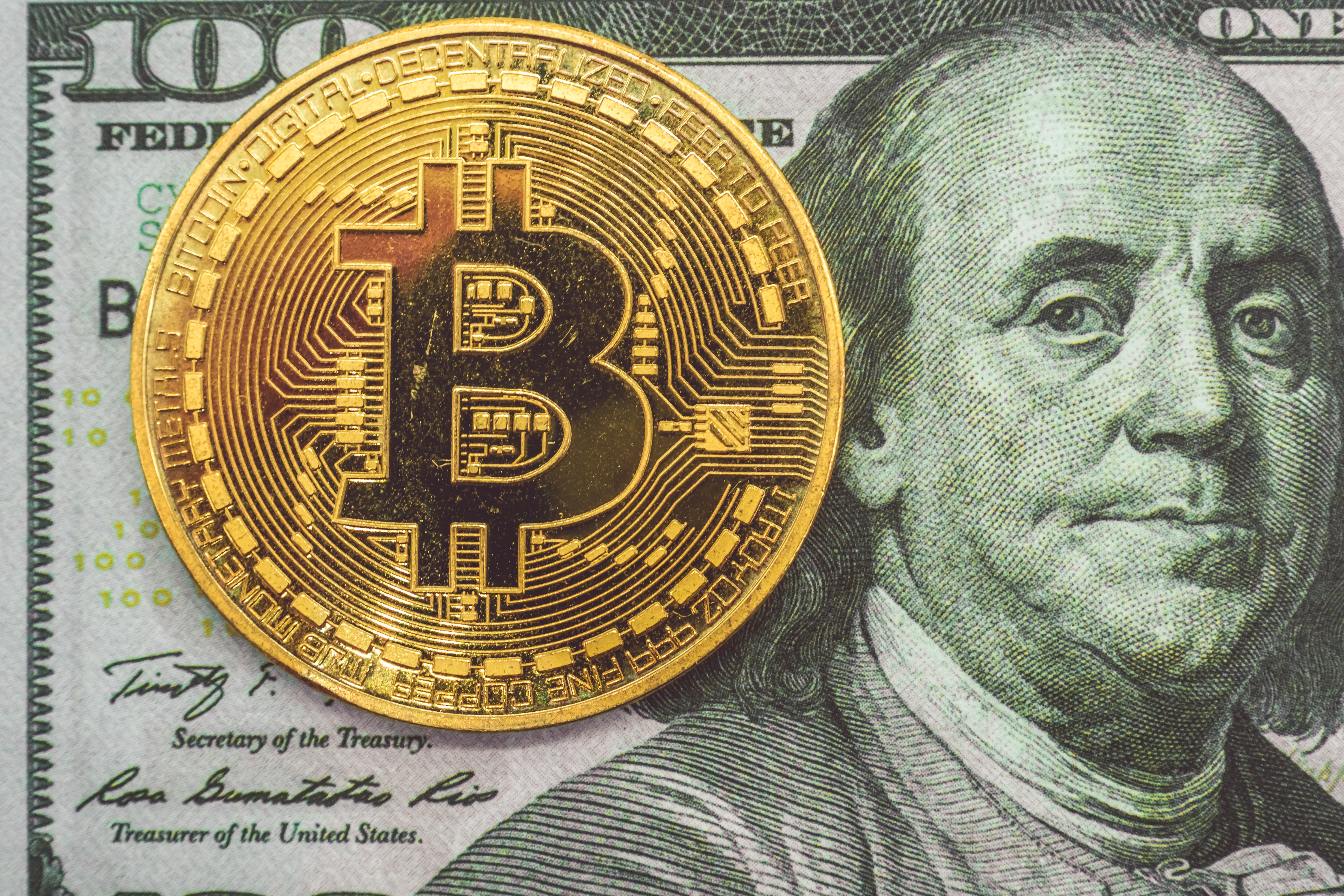 Cryptocurrency: what it is and why it'll win - Crypto #1

Category
Crypto
Publish Date
Feb 6, 2021
Status
Published
Tags
Last Edit
Mar 23, 2022 12:51 AM
Word Count
1731
Order ID
I did not buy Bitcoin (or other cryptocurrencies) as early as I should have. But, as I recently decided to share on Facebook recently, I’ve been buying in throughout 2020 and have reached a point where between 10 and 15% of my total assets are in cryptocurrency. That is a number that I plan to increase over time through a mix of regular contributions with each pay check, and the inevitable appreciation of cryptocurrencies relative to the US Dollar.
I’m sharing this upfront so that you know that I am invested: I am long Bitcoin, Ethereum, and several other cryptocurrencies. But my goal today isn’t necessarily to convince you to buy (even though you should), it is to try to explain what cryptocurrency is and why it is the way of the future.
This image in front of our now Treasury Secretary may become one of the most famous visuals in history.

What is a Cryptocurrency?

Okay, we’re going to have to go through a few definitions in order to get us to that point. Let’s start with a blockchain. This is new technology that enforces data to be immutable (unchangeable) and cryptographically secure (meaning that a hacker cannot simply edit data on the blockchain).
Blockchains are also distributed, meaning that no single computer or source controls the blockchain. Bitcoin’s blockchain is stored on thousands of computers worldwide, which all work to update and maintain it. The code for blockchain includes incentives for each computer to act “ethically” and not try to cheat the system. Particularly, it sends data to several nodes, which must form a consensus for a transaction to process.
Okay, so now, a cryptocurrency is a digital currency that utilizes blockchain technology to create a . By default then it is cryptographically secure and distributed/decentralized. Bitcoin is one of these cryptocurrencies – the first and most well-known at this point. In addition to the aforementioned features, Bitcoin was setup to fundamentally limit the total number of Bitcoin to be 21 million. These coins are released slowly as a reward to those “mining” Bitcoin, which means that they are using (substantial) computer power to verify that transactions on Bitcoin’s blockchain are legitimate.
One last thing: all of Bitcoin’s code is open-source, and thus publicly available. You can take a look here. That code is managed through a typical software development process: people propose changes and then those changes are reviewed and approved if they won’t break anything.
So what has that led to? As of this writing, the value of a single Bitcoin has hit $40,819 and the market cap for Bitcoin is over $800 billion dollars! If Bitcoin were a company, it’d be one of the ten most valuable companies worldwide.
Bitcoin’s price since 2014 – admittedly choppy
So how is Bitcoin stored? Just like regular money, it is stored in a wallet! Of course, Bitcoin wallets are digital, but they work on cryptography: your wallet has an address, which can be public so that people know where to send money, but any transactions are validated using your private key, which should not be shared with anyone! While a wallet’s private key is a string of letters and numbers, you can think of it just like the key to your house or a safe: all the same concepts apply, except that one is digital.

Why is cryptocurrency the way of the future?

Governments have abdicated their responsibility to maintain a stable fiscal asset

I’ll focus on the US government here, though the same could be said for other governments and their currencies. But here is how our government has acted as the steward of the US Dollar in recent years:
Gamestop stock may not be going to the moon. But US Debt certainly is!
Despite having 2020 on the chart, it is already out of date. Current national debt is $27.9 Trillion!
There are no signs that this is slowing down. President Biden seems intent on a $1.9 Trillion dollar bill in addition to our ~$1 Trillion per year addition due to our bloated federal government.
As the saying goes, “any trend that can’t go on forever, won’t.” There are plenty of people who will tell you that this absurd increase in spending of money that we don’t have isn’t a problem. And perhaps that can be a debate for another time.
But when I do a comparative analysis of the US Dollar to Bitcoin, I absolutely have to worry that the Federal Reserve will print a whole bunch of US Dollars to pay this debt, which will increase the money supply and increase the cost of real assets proportionally (inflation). I do not have to worry about this when considering Bitcoin. There are 21 million Bitcoins out there. That’s it.
Gold has been a traditional inflation hedge, but there is always more gold to mine. There are also extensive costs associated with owning gold – storage and security – that is much easier with Bitcoin. Even if Bitcoin ($800B) takes over gold’s position ($12T) as a store of value, a single Bitcoin would be worth ~$560,000 if we insist on measuring values in USD.

This point is often forgotten or misunderstood. You may hear something to the effect of, “regular money works fine and it’s easy, why do I need cryptocurrency?”
To get into the specifics of this, we have to expand our horizon from just Bitcoin to include Ethereum, which adds the ability to code “smart contracts” and have them hosted on the Ethereum network. Ethereum is a much more transaction-friendly currency as a result: if Bitcoin is Digital Gold then Ether (the Ethereum network’s main cryptocurrency) can be the Digital Dollar.
Smart contracts have the ability to execute payments based on code. While this may not change how you pay at a grocery store, it can and should upend finance, law, and real estate transactions. All of these are quite costly due to the cost of intermediaries, who siphon off fees largely due to the lack of trust that side A and side B have the requisite assets required for a transaction. Smart contracts on a blockchain solve this because the blockchain holds the singular source of truth and smart contracts are a mechanism to enforce it.
What other benefits? It makes international payment and money transfers incredibly easy (and cheaper), and it prevents someone from being financially deplatformed – a scary trend that is becoming more common.

The cultural movement behind cryptocurrencies is already here. Noted entrepreneur and Venture Capitalist Balaji Srinivasan summarizes it well in his recent blog post encouraging India to adopt Bitcoin. Take a look, but a few major callouts:
Simply put, the movement is here, now. It is largely here because of the benefits outlined. Trust in the US Dollar is (correctly fading) not just among individuals, but also among countries as many look to remove the dollar as their reserve currency.
If you hold any sizeable amount of US dollars, you are already losing real value every day. That’s happening slowly now, at some point in the future it will happen quickly.

The last thing I’ll mention is that crypto is innovating quickly as it is free from the regulatory shackles that surround, well, pretty much everything else.
There is a perception that buying and selling cryptocurrency is hard. Maybe that was true in 2017, but it is incredibly easy now. You can setup a Coinbase account, link your bank accounts via Plaid, and buy Bitcoin, Ethereum, or many other cryptocurrencies in less than five minutes.
As noted above, VC firms have already invested heavily here. As a general rule, it is unwise to bet against something that Elon Musk, Mark Andreesson, and Peter Thiel are all behind.
More innovation is on the way. Just as the internet took at least 20 years to evolve from a crank project into the backbone of society. Blockchain and decentralization technology will move the same way. It will move slowly… and then quickly (the life cycle of exponentials) as blockchain technology will become easier and cheaper as it becomes more and more prevalent.
Case in point: the “DeFi” movement. While a story for another time, it is becoming easier and easier to take out a loan in cryptocurrency based on a smart contract. These loans are cheaper as the smart contracts replace banks and other intermediaries, and are easier to execute.
At the end of the day, there are risks to Bitcoin or any cryptocurrency. There’s no denying that. But to view the US Dollar as a paragon of safety is quite clearly an outdated paradigm.
It is possible that the value of a Bitcoin drops to pennies in ten years, sure. But given all the current dynamics, seeing the US Dollar drops in value to pennies in ten years is far more likely. All it would take is a series of inflation as our interest rates rise because people don’t want to take on our debt anymore.
Sure, your stocks will inflate along with it. I mean hell, we’re already seeing that! How else do you think that the stock market reaches all-time highs during a pandemic and 2008/2009 levels of unemployment? But even those assets will not rise as much as cryptocurrencies. Mid-to-long term, the US Dollar is a riskier asset based on the available evidence.
Take from that what you wish. But please don’t be surprised, or come crying in ten years when the advice of your financial advisor turns out to be bad. The conventional wisdom of “just go to college, don’t worry about the cost, it’ll pay back.” was great advice… until it wasn’t. Paradigms change. History is full of these. “Just trust the US Dollar, everyone uses it.” was great advice too… until it wasn’t.
If you made it this far, you might as well go and buy some cryptocurrency! Feel free to use my referral link to Coinbase. We’ll each get $10 worth of Bitcoin as a result!